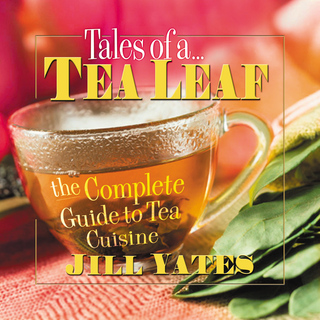 Tales of a Tea Leaf:
The Complete Guide
to Tea Cuisine

“So how did it all begin, this tale of a tea leaf? Tea's elusive past is steeped in stories, legends really, from the Far East where the stirring liquor of the leaves has seeped into the very fabric of society and created a culture that culminates in a cup. Often told, the rich accountings of emperors, spiritual leaders, kings and queens represent the allure and lore that has accompanied tea, the world's most consumed beverage next to water, for nearly 5,000 years.”

--Did you know there was once a plot to kill Hitler with a cup of tea?

--What role did tea play in the impeachment of President Andrew Johnson?

--Have you heard of the Tea Lady, the “tea”cher from Teaneck, New Jersey, who taught her students the value of one million by collecting tea tags from around the world and along the way stirred up some national attention and created their own brand of tea?

You'll find these stories and many more tea facts, quotes and historical trivia in this fun, fact-filled book that offers a unique perspective on the story of tea. Taken from the history books as well as the headlines, Tales Of A Tea Leaf brings the reader a human point of view on the tale of tea. From its legends, propagation, promotion and claims of remarkable health benefits, the story of tea has been brewing for centuries.

Tales of a Tea Leaf:
The Complete Guide to Tea Cuisine

A fascinating and delicious look into the history and mystery of the divine brew.